Congratulations to Amador Calafat for a life devoted to prevention science twitter.com/GregorBurkhart… 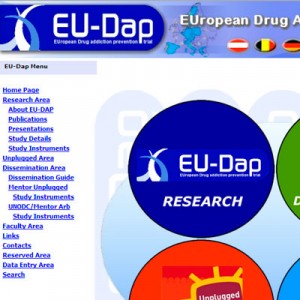 For the first time a made in Europe youth drug prevention project was developed and tested thanks to funding from the European Commission.  After six years the EUropean Drug Addiction Prevention Project has ended and has left behind an effective program to prevent the use of drugs.  In short, EU-Dap developed and tested a school-based alcohol, tobacco and drugs prevention program in seven European countries.  The drug prevention program named Unplugged is still being used today by not only the EU-Dap study group but also many other countries beyond Europe.

In its first phase (2003-2005) The project involved a rigorous study trial over seven European countries to evaluate a new school-based program aimed at preventing the use of alcohol, tobacco and other drugs by students.  Results of the study demonstrated that the program had indeed prevented students from becoming intoxicated and evolving to daily smokers.

In the second phase (2005-2009) the EU-Dap project continued by following up the group of students to see if the positive changes were sustained.  As well, the EU-Dap implemented a dissemination strategy to spread the use of the program in the communities involved.  It was discovered that changes in abstaining from becoming intoxicated were maintained at 1-year follow-up.  In terms of dissemination of the program in communities, more work needs to be done to continue to promote the program Unplugged in Schools.

Details of the results of the EU-Dap Trail and continued project can be found at www.eudap.net